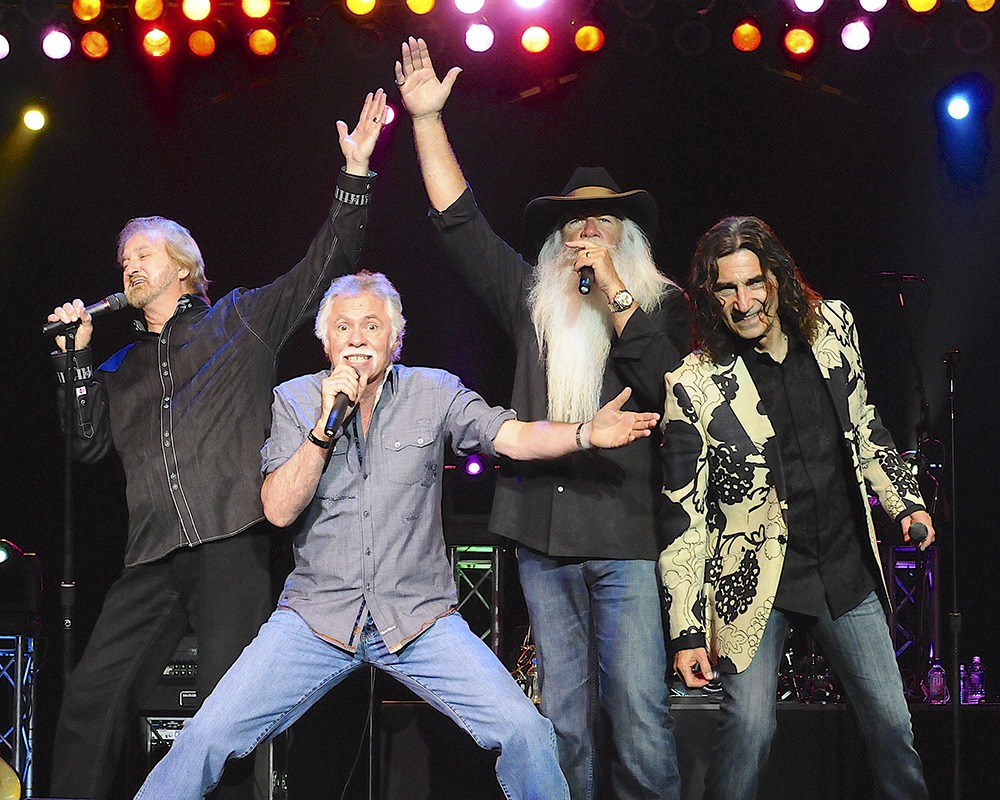 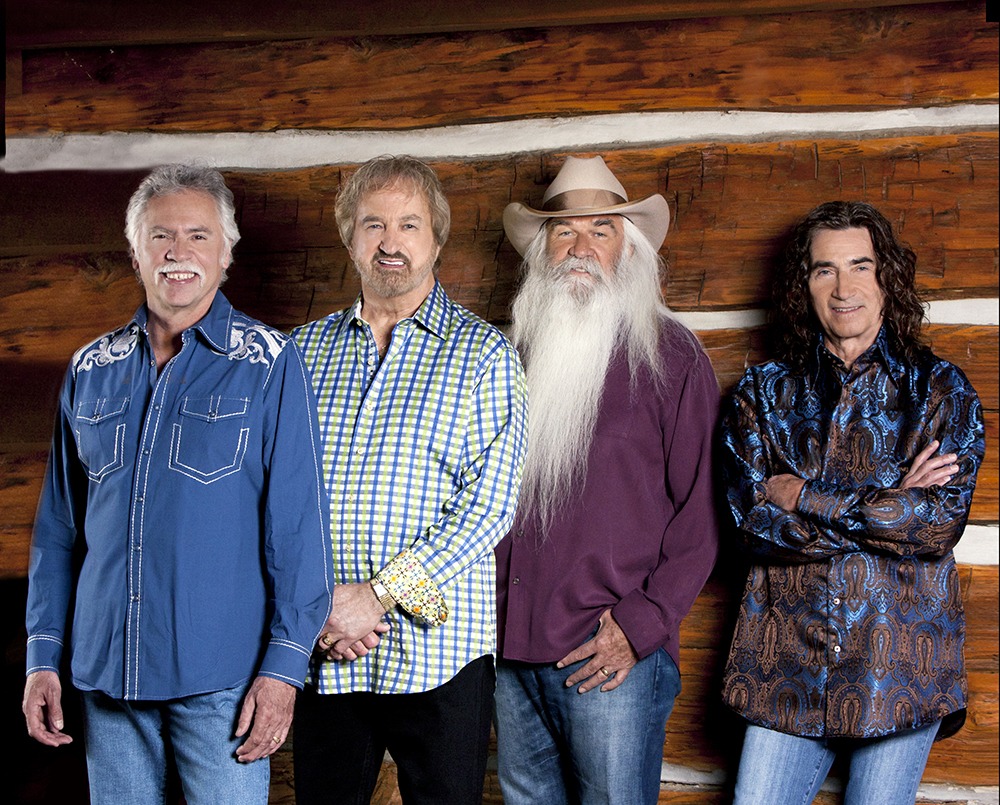 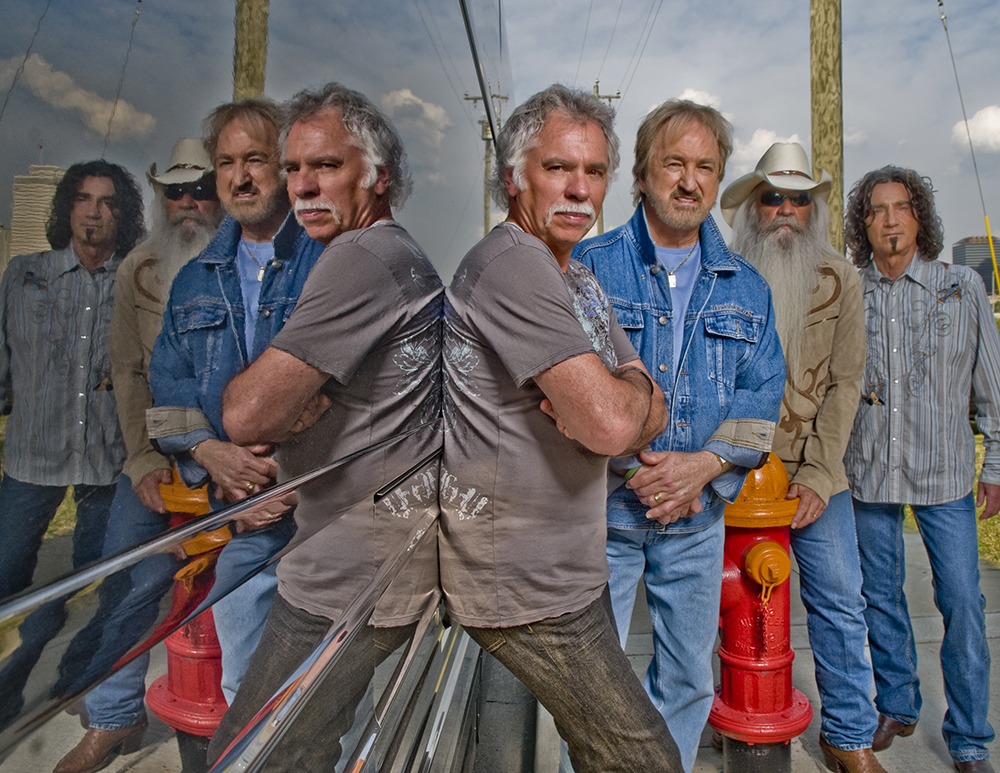 A Piece of History
Theirs is one of the most distinctive and recognizable sounds in the music industry. The four-part harmonies and upbeat songs of The Oak Ridge Boys have spawned dozens of Country hits and a Number One Pop smash, earned them Grammy, Dove, CMA, and ACM awards and garnered a host of other industry and fan accolades. Every time they step before an audience, the Oaks bring four decades of charted singles, and 50 years of tradition, to a stage show widely acknowledged as among the most exciting anywhere. And each remains as enthusiastic about the process as they have ever been.

“When I go on stage, I get the same feeling I had the first time I sang with The Oak Ridge Boys,” says lead singer Duane Allen. “This is the only job I’ve ever wanted to have.”

“Like everyone else in the group,” adds bass singer extraordinaire, Richard Sterban, “I was a fan of the Oaks before I became a member. I’m still a fan of the group today. Being in The Oak Ridge Boys is the fulfillment of a lifelong dream.”

The two, along with tenor Joe Bonsall and baritone William Lee Golden, comprise one of Country’s truly legendary acts. Their string of hits includes the Country-Pop chart-topper Elvira, as well as Bobbie Sue, Dream On, Thank God For Kids, American Made, I Guess It Never Hurts To Hurt Sometimes, Fancy Free, Gonna Take A Lot Of River and many others. In 2009, they covered a White Stripes song, receiving accolades from Rock reviewers. In 2011, they rerecorded a thirtieth anniversary version of Elvira for a Cracker Barrel Old Country Store project.

Gospel Music Roots
The Oaks represent a tradition that extends back to World War II. The original group, based in Knoxville, Tennessee, began performing Country and Gospel music in nearby Oak Ridge where the atomic bomb was being developed. They called themselves the Oak Ridge Quartet, and they began regular Grand Ole Opry appearances in the fall of ‘45. In the mid-fifties, they were featured in Time magazine as one of the top drawing Gospel groups in the nation.

By the late ‘60s, with more than 30 members having come and gone, they had a lineup that included Duane Allen, William Lee Golden, Noel Fox, and Willie Wynn. Among the Oaks’ many acquaintances in the Gospel field were Bonsall, a streetwise Philadelphia kid who embraced Gospel music; and Sterban, who was singing in quartets and holding down a job as a men’s clothing salesman. Both admired the distinctive, highly popular Oaks.

“They were the most innovative quartet in Gospel music,” says Bonsall. “They performed Gospel with a Rock approach, had a full band, wore bell-bottom pants and grew their hair long…things unheard of at the time.”

The four became friends, and when the Oaks needed a bass and tenor in ‘72 and ’73, respectively, Sterban and Bonsall got the calls. For a while, the group remained at the pinnacle of the Gospel music circuit. It was there they refined the strengths that would soon make them an across-the-board attraction.

“We did a lot of package shows,” says Bonsall. “There was an incredible amount of competition. You had to blow people away to sell records and get invited back.”

Their Gospel sound had a distinct Pop edge to it and, although it made for excitement and crowd appeal, it also ruffled purist feathers and left promoters unsure about the Oaks’ direction. Then in 1975, the Oaks were asked to open a number of dates for Roy Clark. Clark’s manager, Jim Halsey, was impressed by their abilities.

“He came backstage and told us we were three-and-a-half minutes (meaning one hit record) away from being a major act,” says Bonsall. “He said we had one of the most dynamic stage shows he’d ever seen but that we had to start singing Country songs.”

They took his advice and the result was a breakthrough.

“Those who came to Country music with or after the New Traditionalists of the mid-eighties cannot possibly imagine the impact the Oaks had in 1977, when they lit up the sky from horizon to horizon with Y’All Come Back Saloon,” wrote Billboard’s Ed Morris. He added, “…the vocal intensity the group brought to it instantly enriched and enlivened the perilously staid Country format. These guys were exciting.”

The Oaks branch out
Their career has spanned not only decades, but also formats. In 1977, Paul Simon tapped the Oaks to sing backup for his hit Slip Slidin’ Away, and they went on to record with George Jones, Brenda Lee, Johnny Cash, Roy Rogers, Billy Ray Cyrus, Bill Monroe, Ray Charles and even Shooter Jennings, the son of their old friend Waylon Jennings and Jessi Colter. Most recently, the group recorded a duet with Merle Haggard for their 2015 Rock of Ages hymns and Gospel favorites album.

They produced one of the first Country music videos. In 1977, Easy, although not released in the U.S., reached the Number Three slot in Australia. They participated in the first American popular music headline tour in the USSR.

The Oak Ridge Boys have appeared before five presidents. And they have become one of the most enduringly successful touring groups anywhere, still performing some 150 dates each year at major theaters, fairs, and festivals across the U.S. and Canada.

They did it with a consistently upbeat musical approach and terrific business savvy.

“We always look for songs that have lasting value and that are uplifting,” says Allen, who co-produced many of the Oaks’ recent studio albums. “You don’t hear us singing ‘cheating’ or ‘drinking’ songs, but ‘loving’ songs, because we think that will last. We also don‘t put music in categories, except for ‘good’ or ‘bad.’ When we get through with it, it’s probably going to sound like an Oak Ridge Boys song no matter what it is.”

They proved their business acumen in any number of ways, including such steps as declining the chance to sit on the couch during their many appearances on the Tonight Show.

“We said, ‘If you‘re going to give us four minutes on the couch with Johnny, we’d rather have four minutes to give you another song that lets people know what got us here,’” says Allen. “We didn’t get here talking; we got here singing.”

They also proved themselves to be capable and tireless advocates of charitable and civic causes, serving as spokesmen and/or board members of fundraisers for the Boy Scouts of America, the National Committee for Prevention of Child Abuse (now, Prevent Child Abuse America), Feed The Children, the National Anthem Project and many more.

The group’s first personnel change in many years occurred in 1987 when Steve Sanders, who had been playing guitar in the Oaks Band, replaced William Lee as the baritone singer. Late in ‘95, Steve resigned from the Oaks and exactly one minute after midnight on New Year’s Eve, Duane, Joe and Richard surprised a packed house at the Holiday Star Theatre in Merrillville, Indiana, by welcoming William Lee on stage and back into the group. The hit makers were finally together again!

The Oaks’ high-energy stage show remains the heart and soul of what they do, and they refine it several times a year, striving to keep it fresh well into the future.

“We‘re not willing to rest on our laurels,” Golden says. “That gets boring. As a group, we do things constantly to challenge ourselves, to try to do something different or better than the last time we did it.”

“I feel like I can do what I do on stage just as good now as I could 20 years ago,” says Bonsall. “I plan to be rockin’ my tail off out there as long as I’m healthy. The people who come out, who bring their families to see us, deserve everything I’ve got.”

“We’ve experienced a lot of longevity,” adds Sterban. “I think the reason is the love we have for what we do—the desire, the longing to actually get up there and do it. We love to sing together…to harmonize together. It’s what our lives are all about.”

“Back” to the future
In 2009, the group recorded a CD, The Boys Are Back, with 34-year-old, Pop-Rock producer Dave Cobb. Cobb encouraged them to stretch musically.

“Seven Nation Army was Dave’s first idea out of the shoot. He said he envisioned us singing where The White Stripes and Jack White do the instrumental parts. It turned out incredibly well,” Bonsall says. “The project is diverse and includes an old spiritual from the Smithsonian archives, God’s Gonna Ease Your Troublin’ Mind, as well as a new Jamey Johnson-penned, soon-to-be-classic called Mama’s Table.”

The Oaks’ new music attracted the attention of a younger audience, while reminding dedicated fans that their favorite group is ever-evolving. “When we throw those songs at the audience, it’s fun to watch their reaction. The cool thing is they’re loving it.” Bonsall says. “We don’t give it any introduction; we just go straight into each song. We did Seven Nation Army in Minnesota a few weeks ago and got a standing ovation. The younger kids in the audience were freaking out.”

Duane Allen, who is Executive Producer for the project, adds, “We went to California to get a Rock and Roll producer who brought us back home to the very roots of our music, which is Gospel mixed with Country, Blues, and Rock and Roll.”

Golden describes the new project as a “musical journey.”

Sterban agrees. “I think David took us down some roads we might not have traveled on our own. The music may be different but he did not try to change us, he challenged us.”

Many have labeled the Oaks’ path as one similar to what Johnny Cash traveled with producer Rick Rubin. The Oak Ridge Boys find that analogy appropriate, almost sentimental, because Cash was one of their earliest supporters and a longtime friend.

“Back when we were struggling in the early 1970’s, Johnny Cash encouraged us. He booked us on his show in Las Vegas, and he paid us too much money. But his belief in us was the most important thing. He sat us down and told us, ‘Boys, you think it’s rough right now, but there’s magic in the four of you. I can feel that magic. I know there is magic there. Don’t break up.’”

And the rest is history.

It’s Only Natural
In 2011, Cracker Barrel Old Country Store asked The Oak Ridge Boys to record an album with a blend of previously recorded and brand new songs. The result was It’s Only Natural, a twelve-track CD with seven rerecorded hits, including the group’s multi-platinum, Country-Pop hit Elvira, and five new songs.

Veteran Oaks’ producer Ron Chancey returned to the studio with the group to produce Elvira and two new songs, and the team of Duane Allen and Michael Sykes reunited to produce the remaining nine. The album debuted on September 19, a month after the Oaks were inducted into the Grand Ole Opry.

While the combination of Oak Ridge Boys and Cracker Barrel is “only natural,” the Oaks stretched—yet again—and invited YouTube sensation Keenan Cahill to join them on what would become a viral music video for their first single from the project. What’cha Gonna Do? was released to country radio in November 2011 and received widespread acceptance on national grass roots and Music Row charts.

In early 2014—forty-one years after Duane, Joe, Richard, and William Lee first stepped onstage together as a group—they celebrated 41 million, RIAA-certified records sold by signing a new record deal with Los Angeles-based Cleopatra Records. Their first release from Cleopatra, Boys Night Out, is a 14-song live project, which was released April 15, 2014. It’s the first live country hits recording ever to be released by The Oak Ridge Boys as they continue to make history.