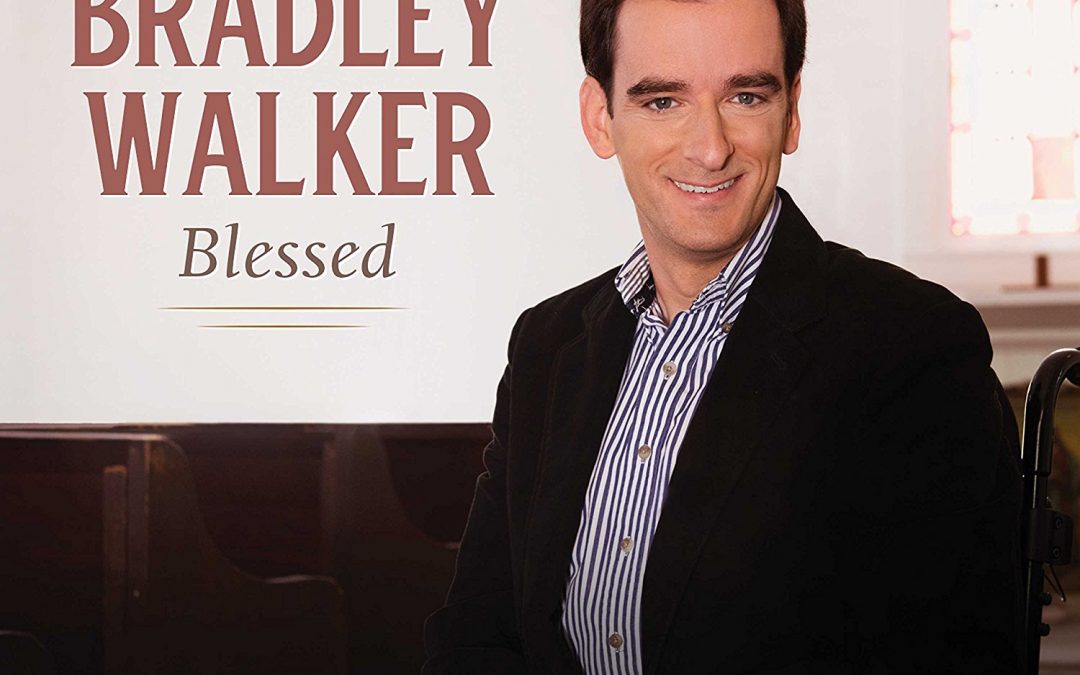 Country singer and GMA DOVE Award nominee Bradley Walker has just completed an all-new, studio recording and LIVE concert DVD of gospel songs and hymns that will be released on October 6. Produced by Ben Isaacs (The Oak Ridge Boys, The Isaacs) Blessed: Hymns and Songs of Faith (Gaither Music Group) captures many of the songs that inspired Bradley to become a singer.

“As a singer, I’d have to say an album like this has always been on my ‘bucket list,’” said Walker.“I have always hoped I would have the chance to make a record full of classic gospel songs that I’ve grown up on, with some new ones thrown in, and make it a good representation of who I am musically. I believe we’ve done that.”

That accomplishment not only finds the Alabama native fulfilling a lifelong dream, but doing so alongside some of his musical influences and heroes.

“Ben [Isaacs] and I wanted to capture the combination of country, bluegrass and gospel that we both love so much. I’m so thrilled for folks to hear how it came together,” said Walker. “We also asked several of my favorite singers on the planet to be on this album with me. These are folks who I’ve listened to and admired for many years and who I’m proud to say have all become friends.”

That group of friends includes the legendary Vince Gill, who joinedWalker for “Drifting Too Far from the Shore,” a classic previously performed by Hank Williams, Sr. and Emmylou Harris, among others. Award-winning songstress Alison Krauss lent her vocals to Walker’s rendition of “Angel Band,” and bluegrass star Rhonda Vincent added her talent to the gospel classic “One Day at a Time.” Country and Gospel Music Hall of Famers Jimmy Fortune and The Oak Ridge Boys performed on the new recording in addition to the GRAMMY®-nominated Isaacs and 15-time GRAMMY® Award winner Ricky Skaggs.

The LIVE concert DVD recording, filmed in Alexandria, Indiana, features an all-star cast of musicians including Isaacs and soloist Charlotte Ritchie. Hosted by Gaither Music Group’s founder Bill Gaither, the DVD spotlights Bradley’s heart for this style of music and his dream to record this collection of songs.

The Blessed: Hymns and Songs of Faith CD and DVD recordings will be airing this fall as part of a TV special on networks including TBN, RFD-TV, PBS, The Heartland Network, FamilyNet, CTN, GMC, GMTN, Guardian, Liberty, TCT, TLN and Gaither TV (available on Roku, Google and the Internet). It will be airing in Canada on Vision TV, CTS, The Miracle Channel and Hope TV.

Known for his unequivocal baritone voice and inspiring story, this International Bluegrass Male Vocalist of the Year Award winner received his first three DOVE nominations this year surrounding his release Call Me Old-Fashioned (Gaither Music Group/Farmhouse Recordings), produced by longtime friend, singer and songwriter Rory Feek (Joey+Rory). A well-loved performer for years among country and bluegrass music circles, Walker garnered nods for Bluegrass/Country/Roots Album of the Year, Bluegrass/Country/Roots Recorded Song of the Year and Southern Gospel Song of the Year.

Blessed: Hymns and Songs of Faith is exclusively distributed by Capitol Christian Distribution and Universal Music and is available throughout general market stores and the Christian marketplace in addition to online retailers including iTunes, Amazon andwww.gaither.com. The recording will also be available this fall at Cracker Barrel Old Country Store®.

View a preview of the DVD here.

To enjoy a Facebook Live Event with Bradley on September 13th, visit: capcmg.me/BW.BlessedFBLive

For further information regarding Bradley, visitwww.bradleywalker.com or follow him at facebook.com/bradleywalkermusic.

Blessed CD and DVD Song Listing:
1. AMAZING GRACE
2. FAMILY BIBLE with The Oak Ridge Boys
3. ANGEL BAND with Alison Krauss
4. I WILL SOMEDAY with The Isaacs
5. DRIFTING TOO FAR FROM THE SHORE with Vince Gill
6. I’LL FLY AWAY
7. CAST THE FIRST STONE
8. THE OLD RUGGED CROSS with Jimmy Fortune
9. BECAUSE HE LIVES with Charlotte Ritchie and Ben Isaacs
10. SAY SOMETHING
11. VICTORY IN JESUS
12. ONE DAY AT A TIME with Rhonda Vincent
13. WHO WILL SING FOR ME with Ricky Skaggs

ABOUT BRADLEY WALKER:
Country singer Bradley Walker is a storyteller. His unmistakable, baritone vocals are refreshing yet warmly familiar as are his songs about life, love, family and his Christian faith. In 2016, the IBMA Male Vocalist of the Year honoree partnered with longtime friend/songwriter Rory Feek to record a debut gospel music collection that captured his earnest style—one influenced by Haggard, Whitley, Jones, Gosdin, Milsap and others. Garnering three 2017 GMA DOVE Award nominations, those songs and his inspiring story have impacted countless people through his TV special, airing on over 15 networks.

In 2017, Walker went into the studio with longtime friend Ben Isaacs to record a traditional hymns recording that showcases his authenticity and finds him joining voices with many of his musical heroes. Whether singing on a Gaither HOMECOMING stage, “The Grand Ole Opry” or the “Ernest Tubb Midnite Jamboree,” this “best-kept secret in country music” continues to put a fresh spin on a timeless style with his unique, faith-infused brand of country music.