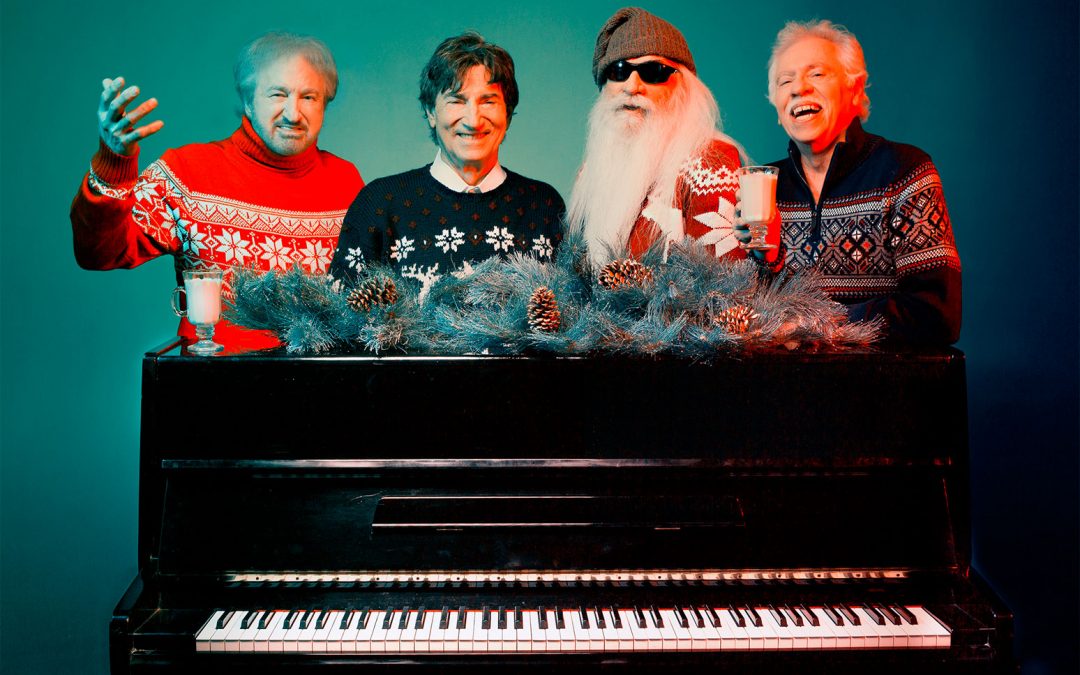 ‘Reindeer on the Roof’ comes from the country legends’ eighth holiday set, ‘Down Home Christmas’

The Oak Ridge Boys got their own little Christmas miracle while recording their new holiday album,  Down Home Christmas, out today (Oct. 25) from Lightning Rod Records/Thirty Tigers.

“We had one more day to record and [producer] Dave [Cobb] came around and said, ‘We need a song for Richard,’” Duane Allen says referring to the Oaks’ legendary bass singer Richard Sterban. “So he got with his writers and at 3 o’clock in the morning, they finished ‘Reindeer On The Roof.’ By 1 o’clock in the afternoon, we were recording that song.  That one happened within 12 hours.”

“I learned it as we recorded,” Sterban says of the song, written by Jake Mitchell and Aaron Raitiere. “It’s so catchy and has a great holiday feel. The whole thing was just magical.”

Allen, Sterban and fellow Oak Ridge Boys William Lee Golden and Joe Bonsall are backstage at the Grand Ole Opry hours before their performance as part of the Oct. 22’s 11th Annual Opry Goes Pink to create awareness for breast cancer. Though they’ve been at this for decades, they are so enthusiastic you’d think it was their first album. They break into an a cappella version of the holiday album’s opening track, “The Family Piano,” before settling in to field questions.

“Recording this new album was so much fun,” says Bonsall. “What a concept huh? Having a ball making music.”

The foursome also had a good time making the video for “Reindeer on the Roof,” which premieres below. Filmed at Santa’s Pub in Nashville, the clip features Jamey Johnson, John Rich and Dennis Quaid. “We had met [Dennis] in Branson, [Mo.] and hung out with him there,” Bonsall.  “He came out and sang a gospel song and we got to become buddies so when [the video shoot] came down, he said, ‘Sure man! I’ll be there for the guys,’ and he did. I thought they were joking when they said they were going to wrap him up in Christmas lights.  Sure enough they wrapped him up and he had a ball with it.  It was so funny and what a good sport!”

“Jamey has such a dry sense of humor,” Allen says of Johnson’s participation. “He doesn’t say much or move around much and that was just the perfect opposite to have on there. And then you had John Rich in the middle with the Santa coat that his grandmother made for him. It was so much fun.”

Down Home Christmas is the eighth holiday album the Country Music Hall of Famers have recorded during their illustrious career. “We’ve become known for our Christmas music after all these years.” Indeed, on Nov. 13,  the foursome embarks on its 30th annual Christmas tour, which will stop in more than 20 cities. “We just take that thing everywhere,” Bonsall says. “It’s a big production.  We’re using these computer screens with all kinds of stuff and we’ve got Santa Claus. It will run the whole gamut of Christmas and that’s what we try to do in our show and in our music.”

The new album features the Christmas classic “Silent Night” and the gospel standard “Amazing Grace,” but the remaining songs are new. “The standards have a place and we still do several of them, but on our show it’s the new songs that have the most magic to us,” says Bonsall. “I remember [Lightning Rod Records president/founder] Logan Rogers saying, ‘Give me one classic and ‘Amazing Grace,’ and go the rest of the way and do whatever you want to do.’  He got me so excited that day I nearly ran through a wall.”

Allen listened to 700 or 800 songs for the new album, but in the end, most of what they recorded were songs penned by Cobb’s cohorts.“His writers have a writer’s room just above the studio at RCA,” Allen says. “We started telling them what we needed and they would come to the studio the next day with a song. It was like the old fashion way of recording.  There are songs that were created just for this project.”

“South Alabama Christmas” was written by  Johnson. Cobb played it for the Oaks’ Golden, a native of Brewton,  Ala., who immediately connected with the lyric. “I love the song. It just takes me back,” he says. “And it’s the only Christmas waltz on here.  The chorus is such a simple chorus but it just says what it needs to say.”

Down Home Christmas is the Oaks’ third collaboration with Cobb, known for his work with Chris Stapleton, the Highwomen, Anderson East and Jason Isbell.  “He is so retro, he’s fresh,” Allen jokes.

“He calls us his crazy uncles and he gets so doggone excited you feed off his energy,” Bonsall laughs. “Dave Cobb is an old soul in a young man’s body.  He doesn’t give a rat’s behind about what is happening in commercial country music. He doesn’t even listen to it.  All he cares about is the music and making what he feels is right for right now. He inspires you and it’s a great, great experience working with the guy.”

The Oaks plan to record another album with Cobb next year, a concept album with a “front porch feel.” “It’s so relaxing working with Cobb because it’s so simple,” Golden says of the producer that the Oaks first worked with 10 years ago on The Boys Are Back album. “It’s not musicians trying to overplay and stepping all over you. All of his music is that way. It has that breathing room.”

“It’s like a spiritual situation recording with Dave Cobb,” Sterban adds. “He comes from a gospel, spiritual background. He was raised by his grandmother and they didn’t have a television. He was listening to radio, hearing all these sounds and getting the guitar and emulating that. He says recording still takes him back to those sounds that he grew up on.”

Following the Christmas tour and a brief break, the Oaks will return to the studio after the first of the year. “It will be fun,” Bonsall says, “but to actually have a little time here to breathe will be okay.”