THE COUNTRY MUSIC CRUISE 2020: A Diary 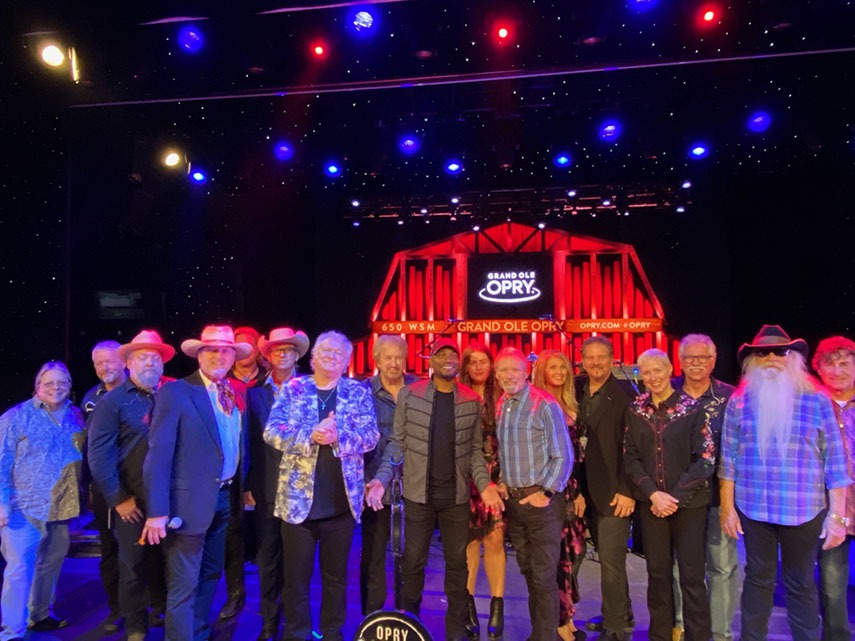 We arrived in San Juan, Puerto Rico two days ago and stayed at a beautiful Marriot Bonvoy Hotel overlooking the Caribbean Sea. After some great food and a night of rest, on Wednesday the Boys, band, crew, and several Oak Ridge Girls boarded the Holland Cruise Lines New Amsterdam to cheers and greetings. The sold-out cruise was chock full of great country music fans.

“ALL RIGHT, THE BOYS ARE HERE!” Someone shouted from the decks as we came aboard. I can’t tell you how good this feels.

The ship had departed Fort Lauderdale on Sunday and sailed all day to St. Thomas, before arriving in San Juan. After boarding, we immediately set up for a soundcheck in preparation for THE GRAND OLE OPRY AT SEA shows after the ship departed from San Juan. We not only co-hosted the shows with the Opry’s Dan Rogers—yes, there were TWO shows—we closed each show with three songs before bringing back the entire cast (the Grassy Knoll Boys, Tony Jackson, Wade Hayes, T. Graham Brown, Linda Davis and the Scott Family, and John Berry) for the traditional singing of Will The Circle Be Unbroken. It was a long night, but it felt great to be singing to the folks. For me, after the last show, I went up to the back deck and shared a pizza with our drummer, Austin Curcuruto, and several others before retiring to my cabin and sleeping like a cat.

Thursday morning around 6:30 a.m. I awoke to honor nature and looked out from my little private deck and noticed the sun was just about to rise. I donned some sweats pants and a tee shirt, headed up to level nine, and went out on the back deck to watch the sunrise. I set up a chair all the way to the aft part of the ship, gazing way beyond the prop wash to watch God’s beauty unfold before my eyes. It was mesmerizing. There was nothing out there but the sea and the rising sun.

I spent some time in serious prayer and reflection until the daylight broke all around me. I looked around and was shocked that I was the only one out there witnessing such a blessing. Thousands onboard, but only Ban-Joey at the back rail gazing out to sea. After feeling totally refreshed and blessed beyond words I went back to my cabin and again drifted off into a deep sleep.

Today (Thursday) is a day at sea, and we have a few events to take care of. There is an autograph session this afternoon that will take a while, and after that a special reception for those who signed up using the promo code OAKSFAN. It is an extra perk for all of us really, as most all of the folks on these cruises are really nice people, and I enjoy spending time with them.

I am always amazed at how many people plan their vacations and off time around The Oak Ridge Boys and not just the cruise. I have talked to folks who see us regularly in places like Renfro Valley, Galveston, Branson, Arlington, and Myrtle Beach, etc. The private ORB event includes photos, conversation, and food—although I don’t know how anyone can actually be hungry. As I have always told you, nobody will EVER starve on a cruise ship.

Speaking of which, as tradition would have it, we will dine this evening with the Time Life / Star Vista powers that be, Exec. Producer Mike Robertson and Senior VP Mike Jason. Mike and Mike have become dear friends and very important parts of our career. We appreciate them so very much. The private dinner will include your writer, as well as Richard and Donna Sterban; William Lee and Simone Golden; the Mighty ACE, Duane Allen; and Darrick Kinslow and his fiancée Jillian Farrar.

As I write, we are passing through the Turks and Caicos Islands, bearing northwest toward the Bahamas, where tomorrow we will anchor down for about five hours at Half Moon Cay. Our schedule tomorrow is to SING!!!! Pam Tillis plays tonight in the main showroom (see our Twitter feed for photos before we lost service) and tomorrow night, while under sail (so to speak) for Fort Lauderdale, we will perform two big shows. During the day tomorrow we are free to enjoy the island and relax until the shows play at 6:30 and 9 p.m.

That’s about it for this Thursday afternoon at sea from cabin 5170. I’ll write more later on, but right now I’m going to see if I can find something to eat around here… kidding….

Thursday night. Just a quick recap. During a full day at sea we signed autographs for over two hours and then hosted folks who used promo code OAKSFAN for a one-hour, relaxed mingle and photo session with lots of tasty food and plenty of selfies. Our dinner later at the Pinnacle steak house with our hosts was very special and much appreciated. After watching Pam Tillis sing for a while, I headed back to my room… Good night!

Friday morning, January 31. Just a quick update… It is 8 a.m. and we are anchored down at a beautiful little island called Half Moon Cay. Weather is about 75 degrees and for those going ashore there is plenty to do. You can lay on the beach all morning, go on one of several excursions including snorkeling trips, glass bottom boats, stingray world, horseback riding, and all kinds of other stuff. Your chronicleolgist (I made that word up) plans to stay onboard, eat a big breakfast, and sleep a bit more. The New Amsterdam departs at 1 p.m. for Fort Lauderdale, and tonight we will be singing! We have two 90-minute shows, and it would seem like EVERYONE aboard is STOKED… I know WE ARE!

Friday afternoon. First show on The Mainstage in 90 minutes… The last few days and nights the seas have been almost like glass, but today, as we steam around the Bahamas toward Fort Lauderdale, we are rolling a bit. Not rough seas, mind you, but just a steady roll. The shows could be adventurous, but we are old hands at this now so we should be fine.

As I type in my stateroom, I assure you we ARE rolling quite a bit. I hope our young pup CURCURUTO is okay with his neck patch. He had a heck of a time last year with dizziness and how he played drums dealing with all that was quite amazing. He may be tested again tonight. I’ll let you know later.

I had a terrific day fellowSHIPping (see what I did there) with lots of great folks and old friends like Moe Bandy, Johnny Lee, and Sonny and Marlin from EXILE as we all ate our way across the Caribbean and now the Atlantic.

It is about time to shower and SING. I love the dress code for tonight… WHATEVER is CLEAN! I have two clean show shirts and a pair of dress pants and one clean denim shirt left for the long fly day tomorrow, so I am DOWN with THAT!

Friday night before bed. Two big shows that were the highlight of the cruise. Main showroom was packed with people who loved and appreciated every single song we sang. It was all so memorable and such a blessing, so please cruise with us next year if you are able to do such a thing. I promise you that you will never forget the experience! Visit countrymusiccruise.com/OAKSFAN Again, when you use promo code OAKSFAN you will get dollars off and several perks.

Old Joey is going to eat a little pizza, sit on my deck and watch the ocean go by for one last time, and wake up early to clear U.S. Customs and head for the Fort Lauderdale airport. We will then fly all day and end up in Las Vegas where Dave and Coop will be waiting with our buses. Then we will have a late-night dinner at Battista’s and drive on down to Laughlin where we open at the Riverside for eleven shows in seven days in the Celebrity Room. I am not sure when you will see this post, but probably early next week. Thanks for riding with us … JSB

Addendum: Only the first show at sea rolled around a bit and by the second show it smoothed out quite a bit… Phew. And THE KID did just fine…