Slip Slidin’ Away with Paul Simon 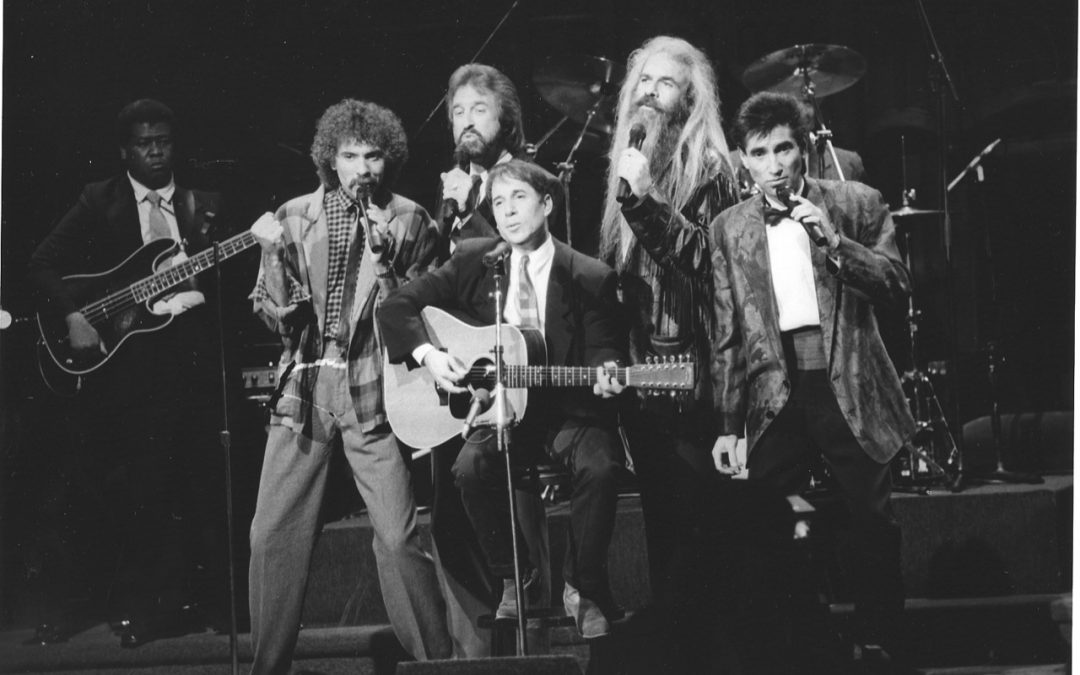 The saga of The Oak Ridge Boys with Paul Simon in 1977 has been chronicled over and over again. However, in light of Paul’s recently announced retirement, this story bears telling again, perhaps with a fresh perspective about a golden and most cherished time in the younger days of our career.

We first met Paul Simon at the GRAMMY Awards in Los Angeles in February of 1977. He had won the Album of the Year nod for “Still Crazy After All These Years” the year before, and — as fans of his music — we were anxious to meet him. We performed a medley of Gospel songs that evening on the CBS broadcast show, live from The Hollywood Palladium, and then presented the Best Inspirational Gospel GRAMMY to Gary S. Paxton. That night we also won our own GRAMMY in the Best Gospel Performance category for “Where The Soul Never Dies.”

This was the same night I thought Stevie Nicks waved at me, and as I happily waved back I realized that she was NOT waving at me at all, so I dug a hole in the floor and crawled in… But I digress.

As it turned out, we were all standing backstage doing press interviews when Paul Simon walked up with an outreached hand, congratulating us for our win and our performance. I remember Duane asking him to consider writing a song for us.

To give you a little backstory, the last year or so had been really hard for us. We had been stuck somewhere between Gospel and whatever was to come, and we needed help. We had just signed a new recording contract, thanks to our manager, Jim Halsey, and would soon hit the studio. We knew that a Paul Simon penned song could work wonders for our career.

Paul laughed and said, ‘Boys, I am selfish with my songs. If I write one I love, well… I don’t give it away. I record it myself!’ Then he added, ‘But let me think about it. I love what you guys do, so I’ll get back to you if something pops up.’

True to his word, he called us a few weeks later. He was producing a rocking girls act called The Roche Sisters, and he wanted us to do some vocals on the album. He paid our way to New York and put us up in the Americana Hotel. The next thing you know, we found ourselves in the legendary A&R Studios singing with the Roche girls and being produced by Paul Simon. We were on Cloud Nine for certain. We did vocals on a couple of songs and went back home, having just experienced the “big time.” And we would never forget it.

But then… Paul Simon called again. He had written a song and said he could hear the Oaks singing on it with him, much like the Dixie Hummingbirds had on “Loves Me Like A Rock.” Trust me, we couldn’t wait to get back to New York City and A&R Studios. This time, the producer was Phil Ramone. We couldn’t get over it. In that very same studio, Ramone had produced Billy Joel, and “A Star Is Born” sound track, and on and on and on.

Paul brought out his 12-string guitar, sat us in a circle around him, and started singing “Slip Slidin’ Away,” all the while figuring out where we would sing, or not sing, and how we would sing when we DID sing. Without going into detail, you must know that Paul Simon is a meticulous genius on every level of the music creating process. He and Phil Ramone were a special team, and it was an education for us. We would find that magic later that same year, and beyond, in the studio with producer Ron Chancey when the hits started coming. But this? I am writing words here, but there really are no words to adequately express what went down during those two days in New York City.

It wasn’t all work either. Paul had all kinds of food delivered, constantly. We would work on the song and eat, then sing, and then eat some more. Paul was a huge baseball fan, and we pitched and flipped baseball cards one day for an hour, the NEW YORK way and the PHILADELPHIA way.

He was working our vocals hard late afternoon when he abruptly stopped everything. ‘Hey guys,’ he said. ‘The Yankees are playing the Red Sox… I gotta go.’

A limo pulled up, Paul got in it… and vanished. It was funny beyond words. Richard and I later boarded a subway train, bought tickets to Yankee Stadium from some guy on the street, and went to the game as well. We sat high up in the left field bleachers wondering where Paul was sitting. It sure wasn’t near us. The next day we all laughed about it and finished recording what would become a huge release for Paul Simon that year.

As a side note, years later, the Oaks were at Yankee Stadium sitting in the owner’s box with George Steinbrenner when somebody asked, ‘I wonder if Paul Simon is here?’ Richard replied, that if he WERE here, he STILL would not be sitting in those bleacher seats!

Okay. You know the rest. “Slip Slidin’ Away” became the biggest and most played song of 1977, just about the time our “Y’all Come Back Saloon” song was gaining traction on Country radio. Overall most folks had no idea that it was The Oak Ridge Boys singing with Paul Simon on that record, but WE knew it. And it was a huge building block, as well as a priceless learning experience, for us. We have been grateful to Paul ever since. I remember driving and listening to our song on Country radio and then flipping over to a Pop station and hearing us singing with Paul. I wanted to shout from the rooftops… Yes, 1977 was an amazing year on so many levels.

Another side note, around ten years ago Phil Ramone and The Oak Ridge Boys were honored with American Eagle Music Awards on the same night, and at that New York celebration we got to talk with him. We were thrilled to find out that he fondly remembered every moment of that 1977 recording session. The great Phil Ramone passed in March of 2013.

Paul would include “Slip Slidin’ Away” as one of just two new songs on a Greatest Hits compilation called Greatest Hits, ETC, and he was kind enough to send us our very own gold album. To this day we call it our first gold album, although we didn’t have a thing to do with “Julio Down By The Schoolyard.”

Another tidbit. We performed “Slip Slidin’ Away” live just once with Paul, on a Showtime Gospel special in 1987. Look it up on YouTube!

I’m not sure if Paul Simon will ever see this, but Paul… if you do, know that we love you, man. We wish you well in the coming years, and we will never forget all you did for us during a time when we seriously needed the encouragement, as well as the education.

When you embark on this final Homeward Bound Tour and you come to a night when you just might need us to sing a little “Slip Slidin’ Away,” just call on us. We will BE THERE!