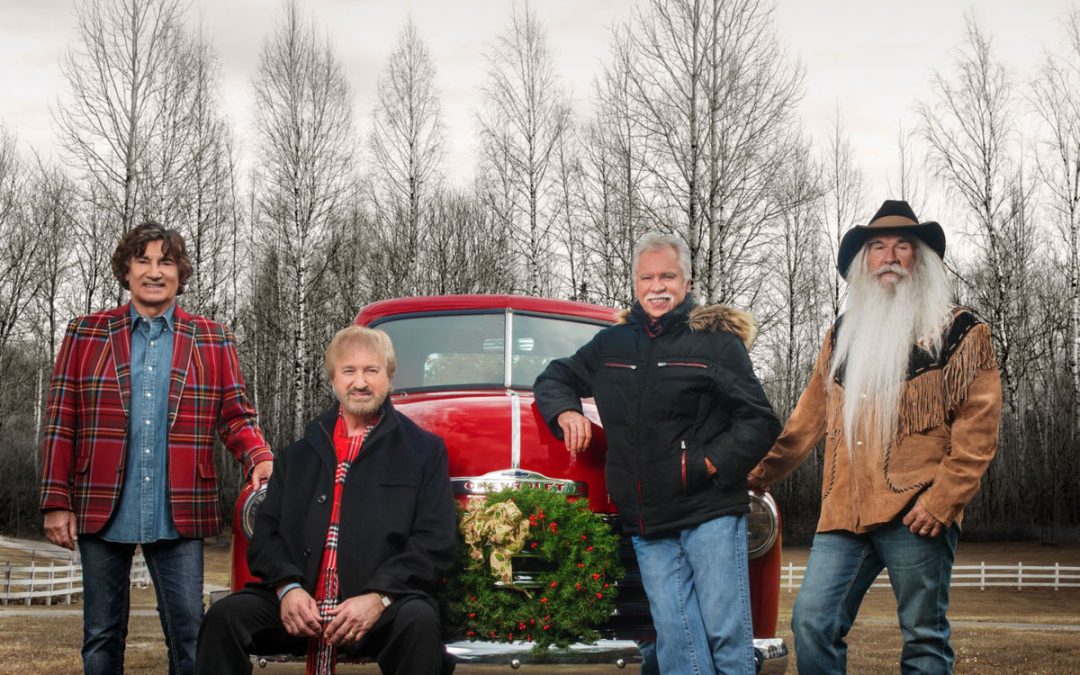 It seemed like a star-crossed moment out of a comic book, an old issue of the Marvel series “What If,” perhaps: Backstage at Bridgestone Arena in Nashville, a photo was taken of country-gospel titans the Oak Ridge Boys and alt-rock gods The Flaming Lips.

The picture was shared by the official Oak Ridge Boys Twitter account, and fans marveled at the combination. “Ladies and Gentlemen … the Oak Ridge Lips!” wrote one person. “From two worlds they came!” exclaimed another. “She Don’t Use JElvira,” referencing the Lips track “She Don’t Use Jelly” and the Oaks’ hit “Elvira,” chimed in a third. It was a pop culture snapshot both charming and bizarre, and for Oaks bass singer Richard Sterban, it was just one more incredible moment in a night full of them.

“Quite honestly, I’d never heard of The Flaming Lips until I met them that afternoon during rehearsal,” Sterban told The Daily Times recently, recounting the star-studded affair that saw the Oaks, the Lips and numerous other celebrities and musicians gather together for a farewell concert to mark the retirement of country music star Kenny Rogers.

“We tweeted a lot of pictures with all of our good friends that day, but nothing got more of a reaction than the Oak Ridge Boys and The Flaming Lips together!” he added. “It was a who’s who of the music business, and the day before his final concert, Kenny was inducted into the Music City Walk of Fame. He could have had anybody he wanted in the music business induct him, and he chose the Oak Ridge Boys. It was a tremendous honor for us, because he was the one who inducted us in the Country Music Hall of Fame.”

Their friendship with Rogers is a long one, dating back four decades; Sterban credits Rogers with helping the Oak Ridge Boys achieve superstardom during the 1970s, and for providing a template for the holiday concert the Oaks will bring to The Tennessee Theatre in downtown Knoxville next week.

“This is our 29th annual Christmas tour; it’s come to be part of our year, it really has,” Sterban said. “We started doing it 29 years ago, and we kind of learned how to do it from Kenny. We learned a lot from him over the years, and he really helped us out in our developing years when he made us a part of his Christmas tour. We watched what he was doing and decided, ‘We think we can do this, too.’ And so it’s become the biggest part of our year. We’ve been rehearsing Christmas songs since September.”

It would be easy, of course, for the guys to skate by without much rehearsal, given how long they’ve been combining those golden voices together as one. The Oak Ridge Boys — Sterban, Duane Allen, bushy-bearded William Lee Golden and Joe Bonsall — are the continuation of a tradition that began back in 1943 with a group known as Wally Fowler and the Georgia Clodhoppers. That Knoxville-based group performed so often in Oak Ridge, according to band lore, that the name of the group was changed to the Oak Ridge Quartet. A burgeoning gospel career followed for the next couple of decades, with the “Quartet” being dropped in favor of “Boys” in 1961, and in 1964, Golden was the first of the current lineup to join the band.

Allen followed, and by 1973, Bonsall and Sterban were on board. They guys received encouragement from Johnny Cash and Jimmy Dean, and in 1976 cut their first country album, “Y’all Come Back Saloon,” touring with Roy Clark and winning the Best Vocal Group Award from the Academy of Country Music the next year. Through the end of the decade, the band branched out worldwide, but it was “Elvira” in 1981 that turned them into country superstars.

“No matter where we go, it’s our most requested song; as soon as we hit the intro to that song, people in the audience go crazy,” Sterban said. “They stand up, they sing along, they dance, they have a big time. It never gets old for us — if you can’t get excited about that kind of reaction, you’d better find something else to do!”

One of the most memorable recent performances, he added, was in 2016, when country star Blake Shelton asked the guys to guest on the track “Doing It to Country Songs,” off of Shelton’s 2016 record, “If I’m Honest.” They readily agreed, and during the CMT Music Awards broadcast that year, he asked the Oaks to perform it live with him.

”It was Blake’s idea to do a couple of choruses of ‘Elvira’ at the end of ‘Doing It to Country Songs,’ and the place went crazy,” Sterban said. “There were young kids out there that you know were not even born when Elvira was a hit, and they knew every word. A lot of the country artists got into it big time. I remember seeing Carrie Underwood singing and dancing and having a big time out there.”

It certainly wasn’t the last time the Oak Ridge Boys dominated the country charts, however. Between 1980 and 1989, the group charted 15 No. 1 country singles (“Trying to Love Two Women,” “Bobbie Sue,” “American Made” and “Gonna Take a Lot of River” among them) and 10 more that made it into the top 10. From 1987 to 1996, the Oaks soldiered on without Golden, but it wasn’t the same band without him — agreed both the Oaks and their fans — and upon his return, the group has continued to pile on the awards and churn out the albums.

In recent years, they’ve cleaned up on the nostalgia circuit — performing the hits with which fans are as familiar as an old favorite shirt — but they haven’t been content to settle for being an oldies act. Two years ago, the Oaks recorded a cover of “Seven Nation Army,” the fierce rocker by the White Stripes, and they’ve recently worked with white-hot producer Dave Cobb on a new record due out in March, Sterban said.

“It’s a very historic, retro project that we recorded at the old RCA Studio A on 17th Avenue South on Music Row, the same place Elvis recorded,” Sterban said. “We went out to the center of the studio and all gathered around the mic, and it was just us and Dave playing his guitar, and I really think we captured an old retro feel.”

While next Wednesday’s performance is billed as a Christmas show, it’s really two Oak Ridge Boys concerts for the price of one, Sterban said: For the first 45 minutes, the guys will hit the high points of their lengthy career, and the set will indeed include “Elvira.”

“Quite often, when people find out we’re bringing a Christmas show to town, their next question is, ‘Will we still hear “Elvira?”’ And the answer is yes,” Sterban said. “You will hear me do ‘oom papa mow mow.’ Then we take an intermission, and after intermission, we do a complete Christmas show. We cover just about every aspect of Christmas — the secular side, the fun side, the romantic side, and Santa Claus even makes an appearance. He goes out into the audience and interacts with the kids, and after the Santa segment, we have something we call our ‘rocking chair segment.’

“The four Oak Ridge Boys sit in rocking chairs in front of a fireplace, and each guy takes time to talk about childhood Christmas memories and what Christmas means to us individually. It really is a chance for the audience and the fans to get to know the four Oak Ridge Boys just a little bit better, and after that segment, we close out with the most important part of the concert, as far as we’re concerned: We do a series of songs that talk about the real, true meaning of Christmas, the birth of Jesus, so it ends on a sacred note. It’s a great, great family show, and it’s a great way for families to spend time together around the Christmas season.”

For Sterban, who grew up in Fairview, N.J., Christmas always takes him back to his childhood, when the town held a contest for the best decorated house, and families throughout the hamlet put forth their best efforts to decorate for the holiday season. Sterban remembers riding through town with his parents, his brother and his sister, staring in wonder at lights through the backseat glass of the family’s car; later on, as a student at Trenton State College, he remembers going from dormitory to dormitory with a small caroling group, singing sacred Christmas songs that continue to mean a great deal to each of the Oak Ridge Boys, he said.

And even though a lot of years have passed between then and now, that love of music — of sharing it, of singing it, of watching it bring smiles to the faces of fans who have been along for the ride for decades all the way down to children barely old enough to walk — is what keeps the Oak Ridge Boys going.

“People ask us quite often — ‘Do you plan to retire?’ And the answer to that is pretty simple — no,” Sterban said. “We still love doing what we do, and we still look forward, when we’re out on tour, to getting out on stage and taking our music to our fans and our audiences. That has not gotten old, and if you’re having fun doing something, why quit doing it? We’re not the young kids on the block any longer, but we’re all still doing good for our age, and as long as the good Lord above keeps blessing us with good health, we plan to continue doing what we do, because it’s what we love doing.”