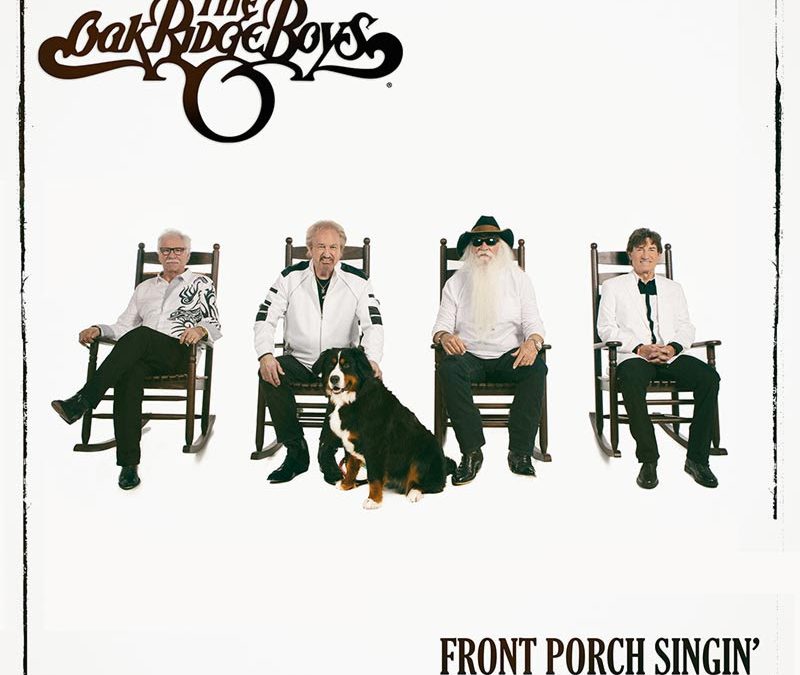 “One of the stunning standouts on the album is undoubtedly “Love, Light and Healing,” a lyrical blanket for the hurting soul” – Tricia Despres, PEOPLE

“Throughout their decades-long career the Oak Ridge Boys have always made music that inspires and entertains in a powerful way, and they continue the tradition on their new album Front Porch Singin’. The collection is filled with songs that uplift and encourage. The first single, “Love, Light And Healing,” is a prime example. The lyric is a positive message that serves as a soul-soothing balm during these troubled times. It’s a potent prescription we all need right now.” – Deborah Evans Price, Sounds Like Nashville

NASHVILLE, Tenn – GRAMMY® Award-winning and Country Music Hall of Fame members, The Oak Ridge Boys swing into Spring with the announcement of their new album, Front Porch Singin’, to be released on Friday, June 11. This is their fourth collaboration with Grammy Award-winning producer, Dave Cobb. Recorded during the pandemic, it was imperative to create a project that offers up just what the lead single details; love, light, and healing. Building anticipation for the upcoming album, the first single, “Love, Light And Healing” is available to download and stream on all digital services today and is premiered exclusively by People.com!

“We were sitting in the studio when David Cobb walked in and asked, ‘If you were sitting on the front porch, just singing songs you know, what might you sing?’ Well, we started singing The Unclouded Day… and he said, ‘Let’s go to the microphones.’ That’s how this album was recorded,” says Duane Allen.

“I always love working with The Oaks and with this album, they’ve really captured the warmest feelings of home and family,” shares Dave Cobb.

The Oak Ridge Boys continue to connect us all through their heartfelt lyrics and uncluttered vocals. While preparing this album, they chose some of their favorite classics as well as a couple of new ones that offer a familiar feeling to every listener. Front Porch Singin’ draws optimism to both the present and the future while showcasing many of the simple things in life that may have been taken for granted until recently.

“This title has become more of an attitude than anything else,” shares Joe Bonsall. “What if the four of us were sitting on a porch together and someone begins to sing a favorite old Gospel song, like Swing Down Chariot, or a country and western standard like Red River Valley, and everyone else just joined in? That is what happened at RCA Studio A. But, as usual under producer Dave Cobb’s leadership, this album turned into so much more.”

“This project is quite honestly one of the most heartfelt albums we have ever recorded,” expresses Bonsall. “It was a bit strange to social distance from each other in the studio, but I believe it drew us all closer and in doing so we may have inadvertently recorded the perfect project for this time period. These songs, whether new or old, reflect a certain optimism and a deep-seated faith that God will work all of this out as we move forward. Life is beautiful as one song says. We must embrace it and celebrate it with all of our being.”

The group—Duane Allen, Joe Bonsall, William Lee Golden, and Richard Sterban—are best known for their iconic and multi-platinum hit “Elvira,” along with other chart-toppers like “Bobbie Sue,” “Thank God For Kids,” “Y’All Come Back Saloon,” and “American Made.” The Oak Ridge Boys have achieved a decorated career, winning five GRAMMY® Awards, multiple CMA, ACM, and Dove Awards for their crossover brand of pop, country, and gospel music that spans multiple generations. The Oak Ridge Boys became members of the Grand Ole Opry in 2011 and achieved arguably country music’s highest honor in October 2015 when they were inducted into the Country Music Hall Of Fame.