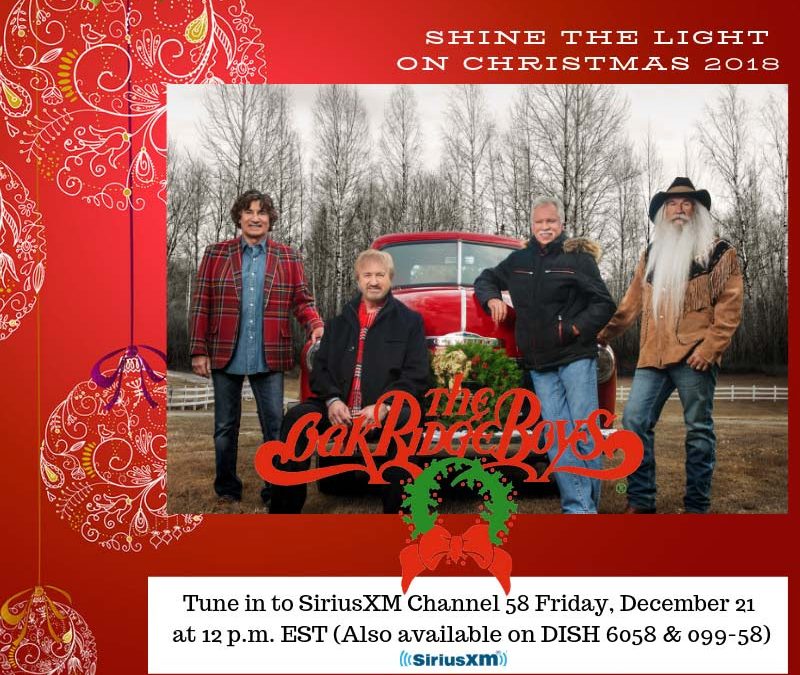 GRAMMY® winning, Country Music Hall of Fame and Grand Ole Opry members The Oak Ridge Boys will premiere an all new ‘Live From Branson’ Christmas Special on SiriusXM’s Prime Country on Friday, December 21 at 12 p.m. ET. Performing songs from their latest album, 17th Avenue Revival, along with Christmas classics, the Oak Ridge Boys authentic sound was captured live at The Mansion Theater in Branson, Missouri during their ‘Shine The Light On Christmas Tour.’

“Two of the most important parts of our 2018 year are the release of 17th Avenue Revival and our Shine The Light On Christmas tour,” says Oak Ridge Boys singer, Duane Allen. “We recorded these live, some of the best songs from both of these collections of songs and they will be on SiriusXM Prime Country for Christmas weekend. This is our ‘Merry Christmas’ to all our fans.”

About The Oak Ridge Boys:
The Oak Ridge Boys, who have sold over 41 million units worldwide, are synonymous with “America, apple pie, baseball, pop, rock, gospel and country music.” In addition to their awards and accolades in the country and pop music fields, they have garnered five GRAMMY® Awards and nine GMA DOVE Awards as well as the Mainstream Artist of the Year Award at the ICM Awards. The group—Joe Bonsall, Duane Allen, William Lee Golden, and Richard Sterban—have earned prestigious membership in the Country Music Hall of Fame (2015 Inductees) and Grand Ole Opry, and are known worldwide as one of recording history’s most extraordinary musical successes. They have charted single after single and album after album, celebrating one double-platinum album and one double-platinum single and more than 30 Top 10 hits, including No. 1 chart-toppers “Elvira,” “Bobbie Sue,” “Thank God For Kids,” “American Made,” “Y’All Come Back Saloon,” among dozens more. For more information and to view upcoming tour dates for The Oak Ridge Boys, please visit oakridgeboys.com.